Turn a unloved suit into something new 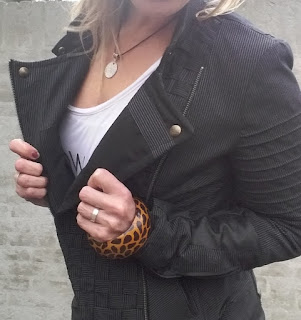 That's the challenge I encountered on Instagram and it's right up my alley: Making an existing outfit into something new or partly reusing it IS SÓ MUCH FUN. #loveit
I did not have a suit that I wanted to remake, so the first part of this challenge started. Shopping! Looking for that unloved suit to be dramatically remade. At my third(!) trip to the second hand shop I choose the only suit that was available as a whole set. In fact, it was still very beautiful and it looked exactly like a suit that my love once had...? Coincidence! The fabric does not have a very exciting print, but luckily it's oversized so there is enough fabric to spice it up. Let the magic begin: transform a neat men's suit into a cool women's suit that I can wear daily. 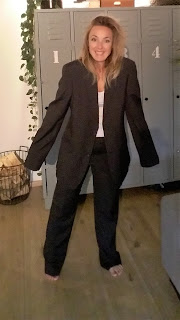 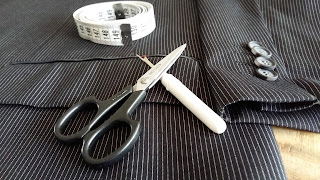 While dismantling the suit I saved as much original detail as I could. Interesting to see how such a suit is made, with different reinforced layers and beautiful finished details. During this process, I thought I'd make a kind of blazer-cape. Quite honestly, I think I would not wear such a coat. So I eventually choose a sturdy jacket. Now I was able to pin the pattern parts  well-considered before actually cutting into the fabric. Exciting!


The pattern I used was a biker jacket that I made earlier, but now with a custom collar, narrower sleeve and slightly narrower shoulder. 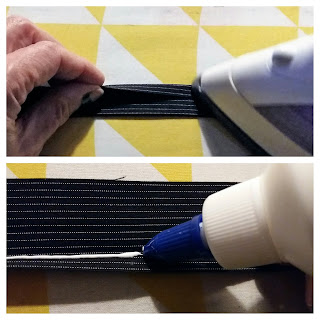 The fairly simple fabric gets some more 'pizzazz' by manipulating the fabric in different ways.  Weaving is a pretty simple technique: first I cut out 4 cm wide strips, ironed 1 cm on both sides inward, so I got 2 cm strips (like biaistape). For convenience, I fixed them with textile adhesive. And then the weaving began. Here and there again a drop of glue, not too much otherwise it gets too rigid. With the pattern part closeby I could be economical with the strips, so I did not have to cut away too much afterwards. Weaving took up the entire back of the original coat. Oops! 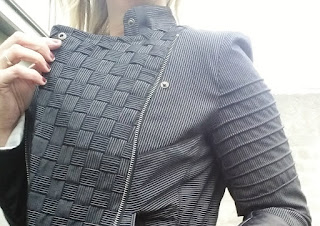 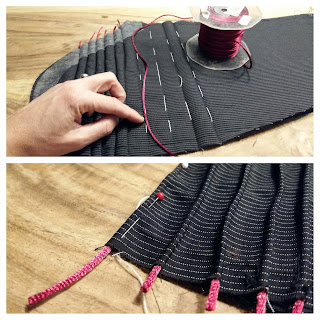 To give more body to the sleeve, I came up with the idea of adding some cord. Just as you would do when you make your own piping-band. For this I used the existing upper sleeve, which was spacious enough. First I determined the distance between the cords, after which I folded and ironed the sleeve in that spot. Then it was easy to place the cords, pinning and stitching it with a small zipper-foot. Next I took over the pattern of the new upper sleeve on the fabric. After cutting it out, I removed the two top cords. Much prettier. Trial & error! 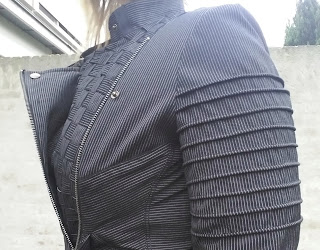 The preserved original details are reused again. The transition of the facing and lining of the inner pouch I found so inspiring that I wanted to use it on the outside. There was just enough fabric to use it at the bottom of the sleeve. As a funny detail I left a small red label indicating the size of the original suit. Furthermore, the fake buttonholes, the breast pocket an the front pockets were also used in the new jacket. See pictures! 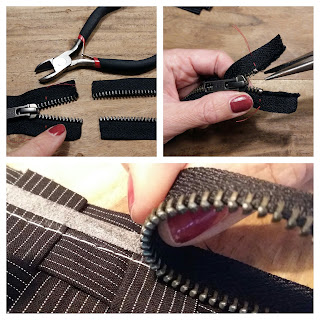 To close the coat I used a sturdy zipper who turned out to be too long. I custom made it and the pieces that were left later came in handy. No waste! With the help of the so called wonder tape (double sided tape) I could fix the zipper before stitching it into the jacket. The pushbuttons make the jacket really tough. The fact they did not have the same color as the elements and slider of the zipper was solved by coloring them with  a waterproof marker. By adding the color en wiping it over again until the bronze buttons get the right amount of black to it.

Crazy enough, the pants were not so overzised at all. Luckely!? The fit at the top of the pants was quit good, I only had to take in the waist. The wide legs I changed into a tapered fit. 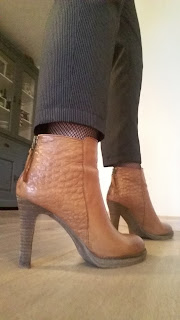 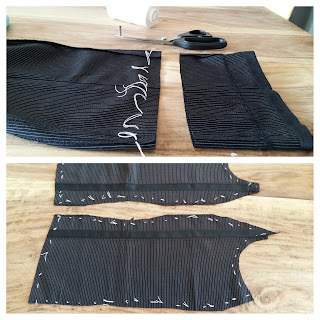 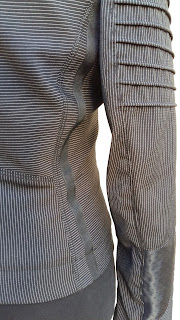 The pants itselve was still not very exciting. It could use some embellishments. I sew the remaining pieces of the zipper in the pocket entrance, added some studs and all the buttons were replaced bij matching buttons form my stocked recycled buttons. Finishing studs! 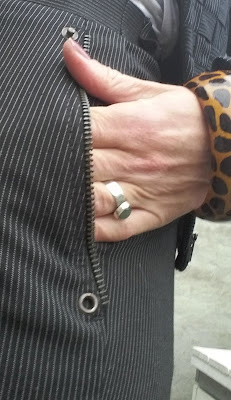 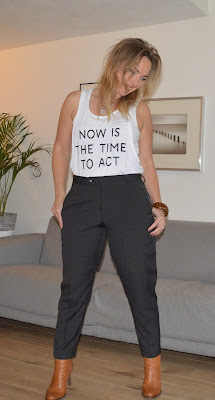 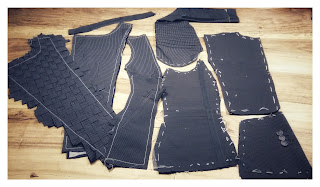 It was like a jigsaw puzzle, and what a fun puzzle to make! There was enough inspiration, but was there enough fabric? That's the question! For the different pattern pieces I had 'to smuggle in' some fabric and but ther still remained some fabric for extra detailing on the colar and schouders. Put in some lining and done! 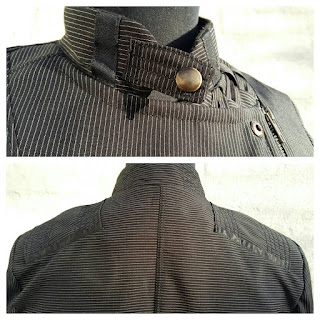 This was a great project to work on. I loved every minute of it. The inspiration flowed generously, I could apply new ideas immediately. In particular, manipulating the fabric produced a suprising and quite spectacular result. It has become a typical LIESL outfit!

Thanks to Portia Lawrie for this great initiative.
#suitsyou #therefashioners2017

A recap of my Minervacrafts blogs!

Door made by LIESL juli 20, 2019
One year anniversary! It was a 'busew' year! In which I wrote 13 blogposts for the Minervacrafts website. Such al lovely collaboration which allows me to work with the most beautiful fabrics and I loved every minute of it! At this moment 10 blogs are posted online, three more are scheduled for later this year. And some new fabrics are on it's way to be reviewed and turned into LIESL - creations. Ten LIESL's in a row One The first blog I wrote was this one about the famous Kielo Wrap Dress from Named Clothing. My version with longer sleeves has a bit of an Asian theme. Read about it here Two The second blog was a bigger project with lots of embellishments: The pink polka-dot trenchcoat. I was inspired by a trenchcoat I saw and tried to recreate it.  Want to see if I've succeeded? Click  here . Three The third one was a dress again in a 'love at first sight' fabric. I have a soft spot for graphic fabrics in black-and-white w
1 reactie
Meer lezen